An EMC FastPass reader reached out to me to share a paper that they had recently written that outlines a solution they found to a radiated emissions problem. They were kind enough to let me reproduce the paper on this blog so that EMC FastPass readers could also benefit from the information. That got me to thinking that other folks probably have a ton of similar stories about failures, troubleshooting and solutions. If you also want to share, I’ve created an easy form to send me the info here. The more you share, the more we’ll all learn, so please do take the time to let us know what you’ve solved in the past.

We’ve all been there – I remember how annoying it was to have a product I’d designed fail radiated emissions testing for the second time. My boss was annoyed and we were getting loads of pressure to fix it so we could ship the product. Sharing will help the whole EMC FastPass community to improve our odds of passing so please do pass on your stories.

There are certain products which ask for isolation requirement to be met. To meet this requirement, we usually make use of isolated DC – DC converters which is an easy and compact solution. Usually this leads to severe electromagnetic interference issues which badly impact the certification/qualification of the product. This is due to the in-built transformer in the Isolated DC – DC converter device, which switches at high frequency, in the range of Mega Hertz. Considerable amount of time and money is spent in debugging and resolving these issues. This paper is intended to address these issues with solutions, which will help the designer to take care at the design stage, thereby saving time & money, the important parameters of the project cost.

These experiments clearly indicated that the isolated DC – DC converter was causing the radiated emission issue.

The last experiment led to significant result where the emissions were very much below (6 to 10 dBuV) the limit line. Once the source of emission was identified, various fixes were tried to reduce the emission from the product, so as to qualify the certification for the product. These fixes will be explained in detail in the paper with emission graph plots too. As a part of EMI filter circuit, it would be better to have provision for certain ferrite bead and capacitor in the Isolated DC – DC converter circuit on the PCB or the board during the 1st prototype phase. During the test, different values of these components can be tried out and the EMI filtering circuit can be fine tuned to attain best results. This will avoid more revisions of PCB to be built, which in turn reduces the project total cost & increase the product turn over time.

The product developed is used as a diagnostic tool in the field of ECU calibration & maintenance. During the Radio Frequency Interference test, there was a failure. Some analysis was done to arrive at the root cause of the issue.

Why is there an isolation requirement for this product?

One of the product requirements, that was mandatory to be met was the isolation between the CAN & USB section. To meet this requirement, an isolated DC – DC converter & isolated CAN transceiver was used. The isolation was provided on the CAN side and not on the USB side. 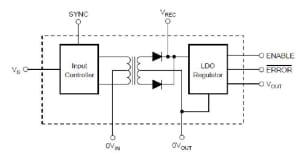 The input supply is chopped at a frequency of 400 kHz (internal oscillator divided by 2), which is used to drive the center-tapped toroidal transformer.

The transformer’s output is full wave rectified and smoothed by the external capacitor connected to VREC.

The internal low drop-out regulator provides a well-regulated output voltage, throughout the operating range of the device.

The DCR01 uses an internal saw-tooth generator to provide the 800 kHz on-board oscillator that is used to drive the power switching circuit. The operation of the oscillator is monitored by the watchdog, which will tri-state the output driver circuit if the oscillator fails, or if the SYNC pin is taken LOW, (shutdown mode). When the SYNC pin is returned HIGH, normal operation resumes. The high switching frequency of 400 kHz allows relatively small values of capacitors to be used for filtering the rectified output voltage. A good quality low ESR capacitor of 1μF placed close to the VREC pin and output ground will reduce the ripple.

The DCR01 is constructed using a driver IC, low dropout voltage regulator, rectifier diodes, and a wound magnetic toroid, all mounted on a lead frame. The DCR01 requires no special PCB assembly processing, as there is no solder within the package. The result is an isolated DC/DC converter with inherently high reliability.

The DCR01 is a switching power supply and as such can place high peak current demands on the input supply. In order to avoid the supply falling momentarily during the fast switching pulses, ground and power planes should be used to track the power to the input of DCR01 (this will also serve to reduce noise on the circuit). If this is not possible, the supplies must be connected in a star formation, with the tracks made as wide as possible.

Due to the high power density of this device, it is advisable to provide a ground plane on the output. The output regulator is mounted on a copper lead frame within the IC, and a ground plane will serve as an efficient heat sink.

This product had to meet radiated emission standard as mentioned below in the table (Table 01). Radiated Emission test was conducted in an anechoic chamber. The distance between the product & the antenna was 10 meters.

However the test failed at certain frequencies (40 Mhz to 80 Mhz) as the emission crossed the limit of 30dbµV/m at these frequencies. The Radiated Emission plots for both the Horizontal & Vertical is shown in the figure below.

RE Plot: Horizontal: 30MHz to 1GHz

The circuit was analyzed carefully. The circuit design for  the DCR converter section had a simple capacitor filter at the input & the output stage. The recommended capacitor value was, 1 to 2.2uF & the same was used as shown below in  Fig 3. U4 is the reference designator for the DCR converter IC chip. [Note – I’ve quickly manually drawn this schematic. The circuit symbols do not exactly match the actual ICs]

Analysis done to find the root cause

Many experiments were conducted to find out the root casue for the issue. The following components microcontroller, power supply chips (both isolated & non-isolated) used in the board, were suspected.  These were suspected as they were switching at high frequencies. As a part of the analysis, each component was disabled and the radiated Emission test was conducted few times. The plots captured were analyzed further. [Note: this is a very good way to track down the source of radiated emissions. Disable parts of the circuit and disconnect cables until the noise reduces or disappears].

RE Plot: Horizontal, 30 MHz to 1 GHz with DCR converter disabled.

RE Plot: Vertical, 30 MHz to 1 GHz with DCR converter disabled.

1)   Add Ferrite bead on the Power line on the Input side of the DCR converter:

EMC filter with a ferrite bead on Power line, on the input side of the DCR converter was used. Usually, a single filter on each side of the circuit board will handle the EMC requirements. However this fix did not help much. [Note – I’ve quickly manually drawn this schematic. The circuit symbols do not exactly match the actual ICs]

Figure 4: PI-Filter provided on the Input side on the Power Line.

To meet international regulations for radio frequency interference  (RFI)  on equipment  and  system  level  there is often a need for some sort of EMC filter on the input & output side of the DC/DC converters. Similar ferrite bead was used on the ground line of the converter.

Figure 6: PI-Filter provided on both the Power & Ground Line.

Though there was ferrite bead provided on both the Power & Ground line on the input side of the DCR converter, the issue was not resolved and also did not show any significant improvement in the radiated emission plots.

In addition to the above ferrite bead solution, high voltage capacitors of few nF/pF (nano Farad/pico Farad) were connected between the input ground & the output ground line of the DCR converter. During this experiment, various values of high voltage capacitors were  tried  to  lower  the radiated  emission  value much below the limit line to have enough margin. The final values of the capacitors 22pF, 0.01uF are shown below in the circuit (mistake in diagram, should show 22pF). The capacitors chosen were rated for high voltage as the  design  had  to  meet  the  Isolation  requirement  of  the product. [Note – I’ve quickly manually drawn this schematic. The circuit symbols do not exactly match the actual ICs]

Basics of using High voltage capacitors between the two Grounds

Due to high dv/dt (rate of change of voltage) present in switching circuits, currents will flow in any parasitic capacitances. There are parasitic capacitances between transformer primary and secondary. Unless there is a deliberate path for return currents (the completion of the circuit), the parasitic currents will flow in unintended paths. If the unintended paths have a large loop area (as they generally will), the loop will radiate (will cause electromagnetic interference). The capacitor connected between the Input ground & the Output ground, provides a short path, with a small loop area, for parasitic currents. Since it bridges the isolation barrier between primary and secondary, it must be Y2 safety capacitor.

Related Post: How to do an EMC Design Review (see section 3 for more details on bridging slots with capacitors to avoid loop currents)

It’s also worth noting that parasitic currents flowing through resistive and reactive paths can cause potential differences that interfere with sensitive circuits, including, for example, the feedback circuitry of the power supply itself. The capacitance of the bridging cap must be small enough so that leakage currents flowing across the insulation barrier are under a safe limit, typically 0.75mA. This is why the capacitance is usually just a few nF/pF.