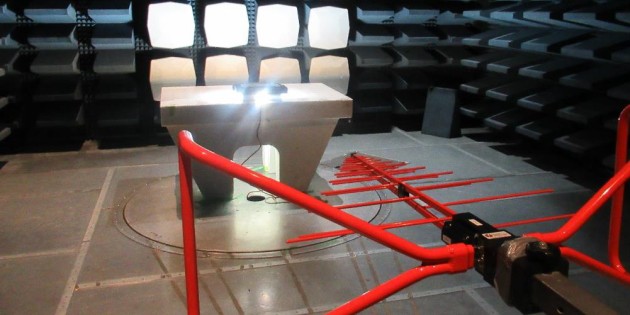 EMI (electromagnetic interference, or ‘noise’ for short) from LED lighting is a very common issue. It may cause interference issues such as disturbing radio signals in the vicinity or it could just be an issue for passing regulatory hurdles such as FCC or CE. In this case study, I’ll focus on a 100W LED floodlight that I recently tested and had manufactured in Asia. For the specific application, this floodlight had to have an extremely low noise level, so I’ll show what it takes to achieve that.

How Is the EMI Generated in LED Lighting?

LEDs are simple semiconductor devices that emit light when a large enough forward voltage is applied across its terminals and current flows.

To generate light, the voltage across the terminals must be larger than the forward voltage drop of the LED. After the voltage has increase past that point, the brightness 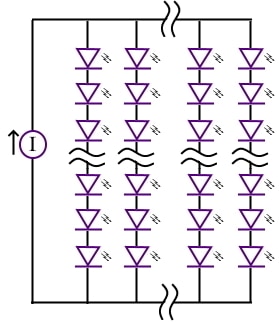 increases proportionally with the current passing through it.

When driving high power LED lights, there are often several LEDs connected in series, and several parallel strings of LEDs as shown to the left.

The driver in this case study is used in constant current mode, although it is also possible to use constant voltage supplies.

The LEDs themselves are either driven at DC (not switching) or by PWM (pulse width modulation). PWM is often used to reduce overall power consumption, taking advantage of a trait of the human eye, whereby short, high frequency bursts of light can be perceived to be almost exactly the same brightness as a light that is constantly on. 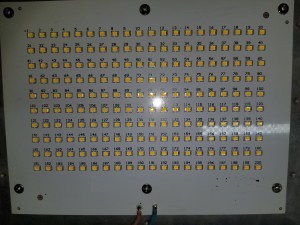 Array of LEDs on a PCB

If the frequency is high enough, a reduction to 50% duty cycle (off for 50% of the time) may result in negligible perceptible loss of brightness.

However, when using PWM, significant harmonics can be generated up into the hundreds of MHz which can easily cause high emissions from LED cabling.

For the light in this case study, we’re dealing with DC current driven by an off-the-shelf constant current source.

The current source is essentially an AC-DC power supply, and this is the source of the EMI.

As I’ve covered in this video on current loops, this video on DC-DC power converters, and several hours in the ‘EMC Design for Compliance: Emissions‘ online course, the source of many a radiated and conducted emissions headache is the switching within a switch mode power supply. It is no different in this case.

I investigated designing a 100W AC-DC power supply from scratch for this LED lighting application, but at the quantities involved, it was far more cost and time effective to use an off the shelf LED driver.

As we’ll see in this case study, all LED drivers (or power supplies) are not created equally! And even though I was using an off-the-shelf driver, there are still some levers available to reduce the radiated and conducted emissions performance.

It’s no secret that time in an EMC test lab is expensive, and it goes incredibly quickly, so it’s best go as prepared as possible.

My strategy for success at the EMC test lab included:

The baseline LED light configuration is shown below: 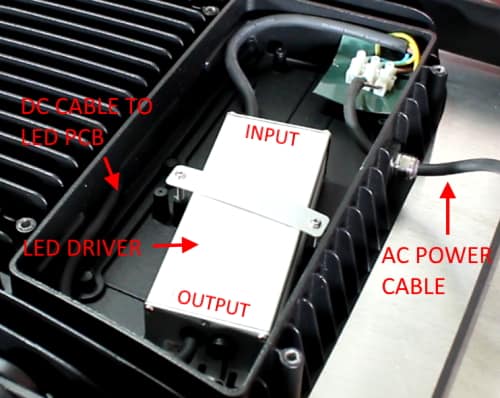 So, the first scan of the LED light yielded the following results: 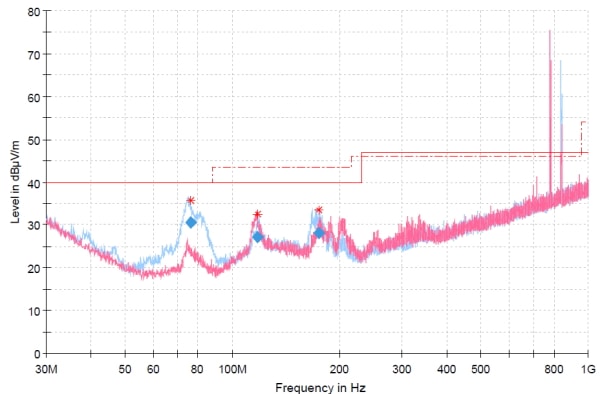 Ignore the emissions around 800 MHz – these are ambient signals in the cell phone bands.

The other bumps are from the light, with blue (vertical antenna polarization) and red (horizontal antenna polarization). The vertical polarization is much worse, which is not uncommon. This is mostly due to the only cable exiting the product (the AC power cable) running vertically from the test table to the floor. The emissions from this cable couple more efficiently when the receiving antenna is polarized in the same orientation.

Normally this would be considered to be an awesome result. The worst case emission is approximately 10dB below the limit line. But for this particular application, it was very important to reduce any emissions below the noise floor, or close to it.

Celebratory rum and cokes would have to wait, I had some work to do!

Modifications to base unit

I then incrementally implemented some of the prepared tests, which are shown in the photo below. These tests were not to prove a production ready solution, they were just to find out where the levers were in the design, so a more elegant solution could be found. 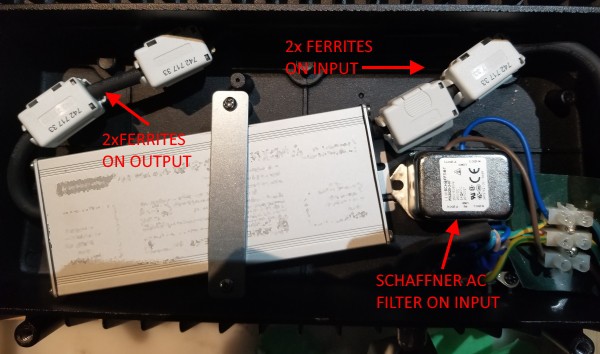 The first thing I implemented was to connect up the pre-installed filter shown above. The filter was a general purpose AC/DC filter from Schaffner, with block diagram as shown. This offers both common-mode and differential mode attenuation, and I expected it would help quite a bit.

The result of that one change is shown below: 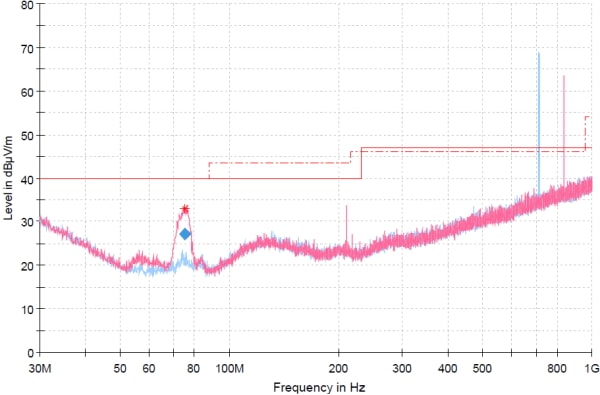 This significantly attenuated the majority of the emissions apart from a stubborn peak at around 75 MHz. The other visible narrowband peaks are ambients.

The next step was to add a clip-on cable ferrite external to the unit which resulted in the following improvement: 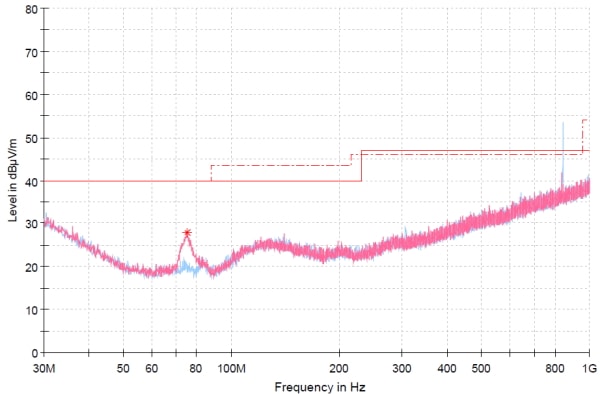 That brought down the peak by approximately 5dB. Typically a single pass through ferrite can attenuate noise by 1-10dB.

Then I added 1 more ferrite externally, which resulted in the following: 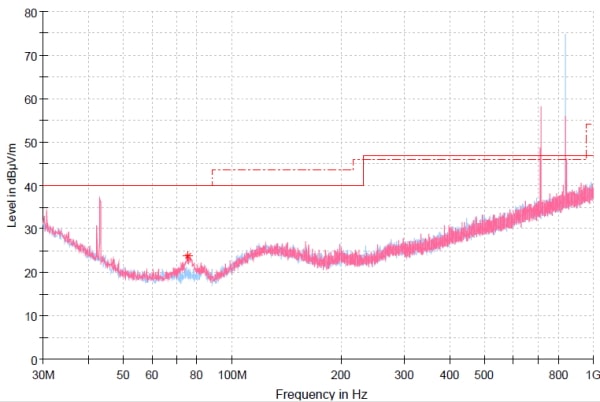 This was close to acceptable, with only one peak approximately 4dB above the noise floor.

Adding several more ferrites internally in the unit did not improve the emissions any further. In fact in some cases they made it worse.

Still, with a filter module and 2 ferrites, this wasn’t an ideal solution.

Time to try another LED driver.

Switching out the LED Driver

Quickly switching out the LED driver as the time ticked down to the end of the allocated time at the EMC lab, and also removing all of the filtering/ferrites that were previously applied yielded the following result: 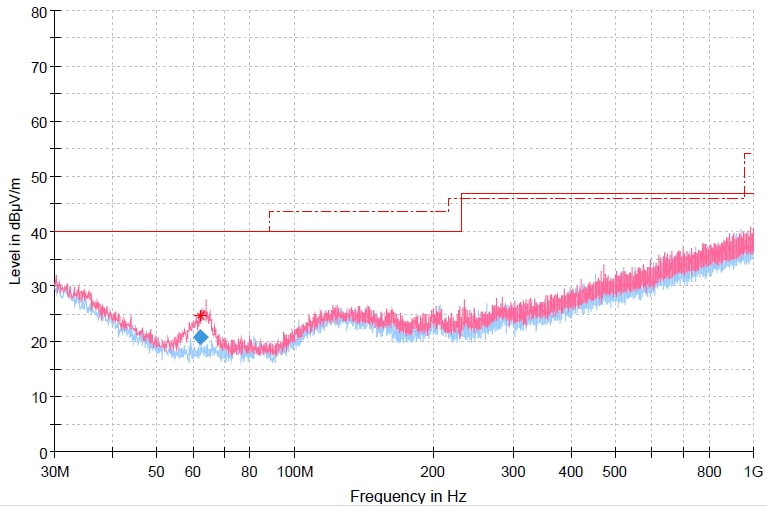 This was an amazing result. The new driver achieved performance better than the previous driver, even without an external filter.

The filtering internal to the driver was much better, both in terms of differential mode and common mode noise. The extra cost of the driver more than made up for the additional cost of the noise filtering components that would be required to use the previous driver.

For the final test, I applied one ferrite external to the unit (Wurth #74270044) to see if it would squash the last peak. 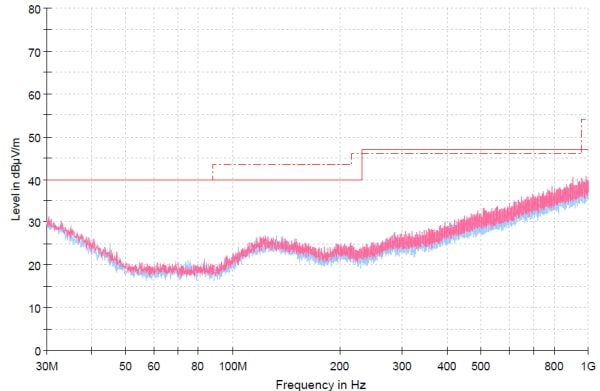 … and there goes the final 5dB!

Now compare to the ambient plot from the chamber: 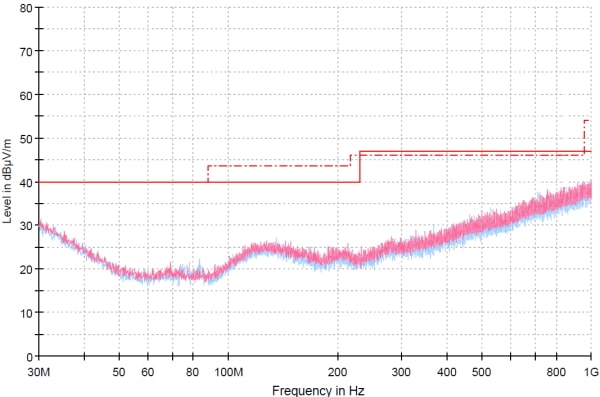 The final result was indistinguishable from the noise floor of the chamber, which was the goal.

This method of choosing a higher performance off-the-shelf supply is used very commonly. For example, if you have an application where you must meet class A FCC limits, you could have a class B power supply as backup, which in theory has higher performance by at least 10dB. But as I’ve shown here, even power supplies/drivers of the same grade can have widely varying performance.

Another consideration for your LED lighting is whether it needs to meet flicker & harmonics requirements. In Europe, under the CE Mark, this is covered by EN61000-3-2 and EN61000-3-3. Typically this applies to electrical equipment with power draw over 75W (many caveats apply).

In US under the FCC’s rules, this is not a mandatory requirement although it may be called out by an international product standard that your product must adhere to.

The flicker & harmonics standards are an effort to minimize wasting power drawn from local and regional power distribution systems. Effectively it’s a limit on the amount of distortion that your equipment can cause to the sinusoidal AC input voltage waveform.

As part of this case study, I bench-marked the LED floodlight against a similar product.

It became apparent quite quickly that the other product did not have active harmonic suppression. The power factor and total harmonic distortion were much worse and it failed the harmonic current test. Whereas using an LED driver with block diagram similar to the one shown at the start of this article allowed for a much better power factor and THD performance. Comparison of the results between the two products shown below: 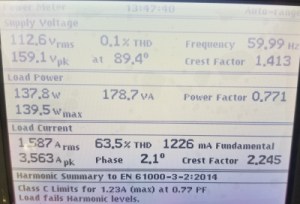 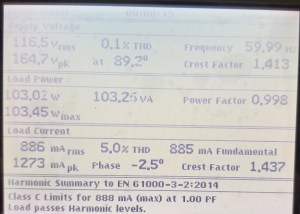 These measurements were taken using a flicker and harmonics analyzer (HA1600A) from TTI Instruments.

Summary of methods to minimize EMI from LED lighting

While our hands are somewhat tied when using an off-the-shelf power supply or LED driver, there are some things we can do to minimize emissions.

This was a simple case study about reducing EMI from a 100W LED floodlight when using an off-the-shelf LED driver. If you would like more in-depth training on low EMI (radiated and conducted) power supply design, check out the EMC Design for Compliance: Emissions online course.